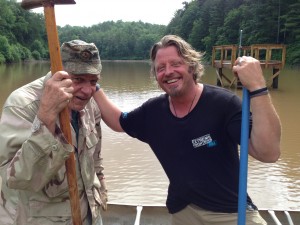 We were back on the bikes for another epic drive straight after the diving and so we arrived in Charlotte the night before. Waking up in Charlotte on the 4th July was exciting. You can really feel people’s anticipation for this holiday. You can also feel their annoyance as flash floods were warned! In the morning the weather was fine. At the Charlotte Museum we met Jim Williams and Tom Phlegar. Both battle reenactors and more specifically for us today they were helping us reenact the war of independence. Well, they taught me how to shoot a massive black powder gun! Which was awesome. We had our first Google hang out with Discover America’s Talia. I am not sure it went quite to plan as we were already on the road but it was great to answer questions from all the guys following us and we will plan to do another one that isn’t as rushed!

We still had a 6 hour drive ahead of us as we travelled the breadth of North Carolina to drive the ‘Tail of the Dragon’. Only 11 miles but 11 miles of bends that never stop and it was a hell of a ride.

Find out more about North Carolina in our latest blog.

It was really starting to hit me the enormity of this challenge. We were covering the whole of America basically in under 6 weeks. We were back on the bikes very early and with no phone signal I wasn’t able to speak to any of my family at home which always makes things slightly tougher but of course you perceiver! As we travelled the windy roads of North Carolina West we ended up at Big Bradley Falls.  What an experience the falls were rappelling down one of the largest waterfalls in America! Check out the photos and you will see! Green River Adventures really sorted us out and they knew exactly the right place to take us.

The fun never stopped though and to be on top of our schedule we had to move fast. We travelled to South Carolina that night and met up wit SC Mountain Lake company to camp by the Chattanooga River and hopefully experience rafting down the lake with the same man who taught the ‘Deliverence’ Cast, Charles Wiggens.

We camped by the lake and it did not stop raining. I was pitched right under a small lake and the whole tent was soaked. I thought it might even drift in to the swell. More unfortunate for us though was the fact that the rain had made the Chattanooga burst its banks. This meant that the river was too dangerous for us to paddle. However Charles and I found a place and it really brought back memories of Dad’s film paddling with this incredible man.

We hoped that maybe we would be able paddle the streams tomorrow, but while we waited we went to the Hotel that the crew stayed in. The Dillard Hotel in Georgia. An incredibly honest Southern experience that hasn’t lost any of its charm. Here we met some  of the cast and we also had a traditional 4th July firework display. Just spectacular.

You can read more about the Chattooga River here and check out photos and videos of Charley’s Adventures, and keep track of what they are up to on Facebook, Twitter and Google+. 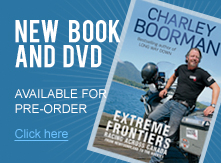 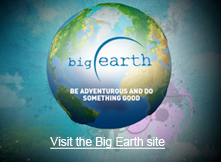 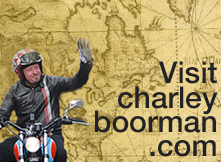 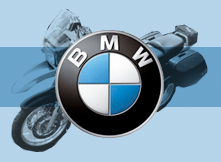